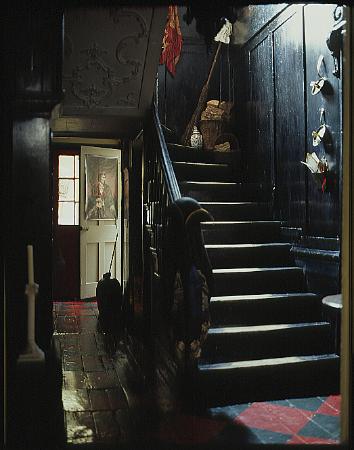 My continuing mission, to seek out well-known museums and their gift shops, to review what no one could be bothered to review before for the very reason that it is a frankly bizarre choice, was recently combined with a powerful desire to have a cream tea and cry over dead soldiers with a new friend. Happily, the Imperial War Museum, aside from being an imposing edifice and exceptionally well-stocked in matters relating to the two World Wars, also boasts a tea room and a gift shop in which to sate these strange longings. And apparently doesn’t mind two odd-looking women wandering through their exhibits burbling about poetry.

We then wandered off to the South Bank for cocktails at the BFI bar, which is irrelevant to the review but gives me the opportunity to promote one of my favourite bars (it’s right by the river side, does lovely snacks and cocktails, and you can sit outside in deckchairs all year round watching people go through the book market), and to throw in another route map:

Number of Gift Shops: 2 (one general and integrated, one exhibition-specific on a higher floor).

Before I surge on with this particular review I must declare a bias that may or may not affect the outcome: as regular readers of this blog will be aware, I have an embarrassing and overblown emotional thing for T. E. Lawrence, and as visitors to the Imperial War Museum will be aware, a number of items relating to him are on display there, including some of his clothing from the desert campaigns, a bust, and his Brough Superior. The museum also boasts an extremely tempting book about him in the gift shop which features his drawings and photographs and other ephemera, so in the unlikely event that this review starts to sound like the foot-stamping tantrum of a spoilt toddler it’s because I realised I couldn’t throw money after anything and was not allowed to buy this book or the ceramic bottle of sarsaparilla cordial that I was coveting.

The Imperial War Museum gift shop is like the History Channel made solid, and that is both a compliment and a condemnation. The books, which focus almost exclusively on the World Wars (although from just about every conceivable angle), muted and monochrome with explosions of red, and the same fonts used over and over in bleak slabs and faux-stencils.

The shop itself is like a strange collision between a toy shop (the children’s section features a selection of model aeroplanes, spy games, and tank spotting guides the like of which could not possibly be found elsewhere) and some strange retro kitsch emporium. Keep Calm And Carry On merchandise is rife; Bakelite rotary dial phones, fake ration books, “Home Front” fudge rations and the aforementioned sarsaparilla cordial litter the place as if it’s the TARDIS crash-landed in a somewhat inaccurate 1940s grocer’s.

Unusually, it has a section devoted to music (which is, unsurprisingly, music of the wars and plays heavily on nostalgia for swing and ragtime), and a variety of miniature replica medals; the thought of purchasing the latter makes me enormously uncomfortable. The shop spills out onto the forecourt in the same manner as that at the London Museum (see previous Bric-a-Brac and Indolence posts for review) and heralds untold delights within in the form of a £500-or-so aviator jacket on prominent display. The untold delights never quite deliver, although there are, bafflingly, bouncy rubber eggs.

One area in which the gift shop does excel, and which poses the most danger to the wallet, is their selection of wartime propaganda posters. It is by no means as broad as the fascinating exhibition the museum held some years ago of propaganda posters, but it’s enough to tickle the fancy of anyone into retro art, or anyone who really wants to wake up to Winston Churchill’s face.