A little while back now, I dragged my entire household and a visiting friend to the Tate Britain to see the William Blake exhibition: the first thing I’ve paid to see there since their Queer British Art retrospective was timed, in 2017, to coincide with the 50th anniversary of the partial decriminalisation of homosexual acts in private (1967). The exhibition space , in the basement level, is large, logically laid-out, and seemingly endless. The one thing you can say about exhibitions in that Tate Britain space is, regardless of whether you enjoy the content, you certainly get your money’s worth by volume.

It’s far from the first Blake retrospective the Tate Britain have held–indeed I think I remember going to another one some years ago and getting lost in the upper levels–but one can hardly blame them for using the collection as a money-spinner. Thanks to Blake’s irrefutable links with London (born in Soho, lived in Soho, worked in Soho, died in … Charing Cross) and his posthumous popularity with would-be mystics and nerds of all stripes, it was always going to be a successful venture.

So we’ll ignore for the time being the fact that Blake exemplifies the savage adage that for British art to be successful it also has to be ugly (Blake, Bacon, Turner, Emin… somewhat falls apart with Gainsborough, Constable, Stubbs & Wright of Derby although those aren’t exactly spectacular). 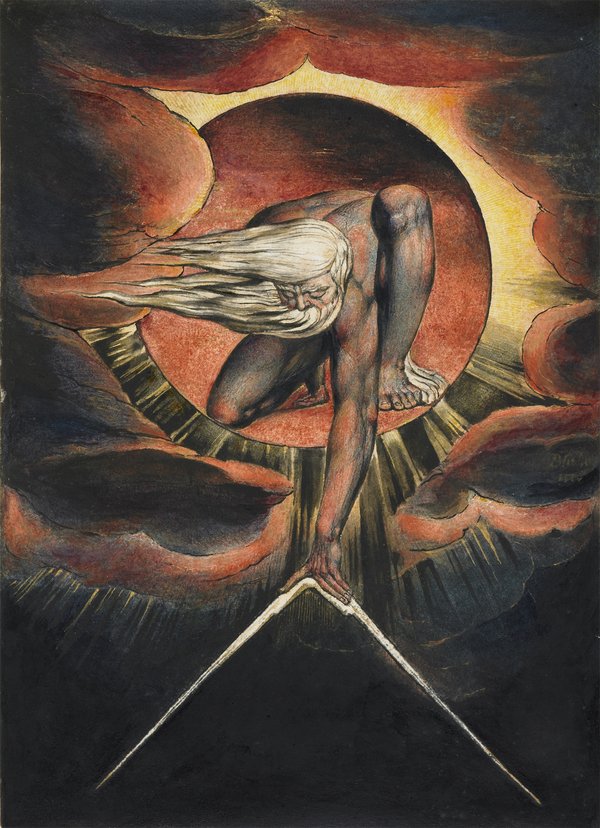 It can be challenging to fill an exhibition space of considerable size with work by one artist and not drive everyone bananas with monotony, particularly when said artist got a handle on their personal style early on, and I think the Tate Britain made a decent and logical stab at presenting both a standard chronological narrative beginning with an overview, and of providing context.

Particular mention should be made of the effort to situate his work among his peers and inspirations, including Fuseli and James Barry  (Uncle of James Miranda Barry, in fact), which somewhat gave the lie to the later claims of staggering uniqueness made by his fanboys–which we’ll come to later.

Worthy of note also: contextualising the work with a modest recreation of his townhouse exhibit of his works (accompanied bizarrely by a reading of his text by The Actor Kevin Eldon) was a gesture in the direction of breaking up the threat of monotony and a satisfying if far from total immersion in experiencing Blake the way his contemporaries might.

It’s also good to be introduced to new information, and while I’d been aware of Blake’s background in illustration and engraving I hadn’t been aware that he’d invented his own form of relief engraving, which was given due fanfare–although as Blake had in typically secretive fashion failed to reveal his process we were not treated to any diagrams or recreations which might have further contextualised or enlivened the fact.

It is of course important to take a clear-eyed view of the wider global context of even such insular figures as Soho-locked Blake–the world is after all connected–and so I was pleased that the curators had chosen to include Blake’s commissioned illustrations of a fairly unrelentingly colonialist tract, asking if his decision to select a brutal, uncompromising image of a slave being tormented for some minor transgression such as ‘wanting to be treated like a person’ was a criticism of the text he was working on and the events contained within–or titillation in the vein of tabloids.

There was little further space given to the question. Blake was opposed philosophically to slavery, and the time was rife with debate and dispute in his native London, but no mention was given to any broader abolition movements he might have encountered–in fact, the display of the image raises similar questions about the exhibition. Is this necessary? Is this titillation?

Another area that didn’t get as much focus as I would have liked was the revelation, given at the beginning of a section on his printing methods and lurid colourful images from what Long Suffering Boyfriend described as “Blake’s Biblical RPG”, the Book of Urizen: that the vivid colours of the Book had been painstakingly hand-painted not by Blake but by his wife, the oft-overlooked Catherine Blake.

And apparently this was all that needed to be said. Even though it casts a very different–if common–light on the “genius” of Blake, in the same way that the “unprecedented” style of Blake very clearly derived from Fuseli and Barry; it is so common that the Lone Male Genius in history is supported to the point of exhaustion by his wife, who edits or colours or types or translates his “genius”, who makes his “genius” the thing it is recognised, who deals with every other aspect of his life so that his “genius” can flourish–and receives absolutely no recognition from history for it.

The exhibition wasn’t completely devoid of contextualisations; aside from his artistic influences, we got a glimpse of how he began:

Early in the exhibition, before Blake’s professional influences, came descriptions of his time as an art student and his brief travels into places that weren’t London. From this we discovered that while he enjoyed working from the reference point of classical statues, he detested working from life models, complaining that they had no life in them, that he found them “dead”, with a kind of contrarian logic that caused the Resident Australian (herself a regular artist) to laughingly compare Blake’s attitude to that of Deviantart teenagers countering every criticism of their tendency to draw only from Anime with “it’s just my style! It’s meant to look like that! It’s my style!”

This was then brought out at every point that Blake’s idiosyncratic anatomy got the better of us. It’s hard to treat an artist with the mystic reverence occasionally preferred by their fans once a thought like that is lodged in your head–and I can always count on the Resident Australian to puncture any bubbles of pomposity and self-importance developing around historical figures, or contemporary ones.

In addition to the creation of Blake’s myth of genius (it’s worth noting at this juncture that the idea of lone genius generally feels like bullshit; i am not singling Blake out any more than any other “visionary genius of art”) balancing on the diligence of his wife’s colouring skills, at a later point in the exhibition we begin to come across the fanboys–that is the younger artists and patrons who both buy into Blake’s self-image and support and disseminate it.

The Resident Australian also had some scathing words for Blake’s petulance at his most ardent supporters not supporting him in the correct way / demeaning him with requests that he share space in publication or exhibition with other artists… “genius” or not, William certainly wasn’t cursed with poor self-esteem. To admirers this doubtless seems like clear-eyed rejection of needles social niceties. To people like the Resident, whose job brings her into contact with some highly precious and self-important people, it just sounds like someone sniffing their own farts. I’m inclined to agree.

Self-mythologising is something I’ve looked at in more detail some time previously but it’s worth drawing parallels now between the subject of that piece and this: while Blake was occupied with the ideal of the classical artist reborn and dispensing high and symbolic art to learned men, Lawrence also filled his own head with an archetype for himself to live up to: the messiah or Moses figure. Arguably even more self-aggrandising, if rooted in ideas of “service” as much as salvation, the desperation to believe in his own myth allowed him to participate in constructing an image for a specific end, that of support-raising.

The cause he meant to advance with his mythmaking never succeeded because he’d failed to separate the image from the reality and accept that he was never going to be able to outmanoeuvre the demands of kings and politicians for the sake of his saviour fantasy.

Likewise, although Blake has received armies of famous and often equally mystic fanboys after his death (Alan Moore, for example), his reality and his myth never got to meet within his lifetime. We can look at Blake’s lurid later works and see them as the visionary imaginings of a mystic seer as Moore does, but without the veneer or myth it’s equally easy to scoff at weirdly-rendered serpents (drawn from medieval art much like his grand gestural figures), at his “self-insert bible fanart”. The mythology is as much the art as the art itself is–Blake’s self-image, his distorted conviction, the lore of Blake in the game sense is crucial to appreciating the art, moreso even than worldly or cultural context. This is art for nerds.

In light of that pop cultural connection, this Gary Gygax of fine art, it’s even more glaringly obvious that the world’s most edible painting (c.f. Thomas Harris),  The Great Red Dragon and the Woman Clothed in Sun. As perhaps the best known Blake painting, thanks in part to Harris, it would have been a major draw… and the entire reason I went was to see if I could best some friends who hadn’t succeeded in Francis Dollarhyde impersonation!

I’m not sure how I’d address some of the issues with the exhibition because they’re the same issues every exhibition based in static, faded images faces; I would have liked to have seen more context, perhaps–more about Catherine Blake, more about the broader artistic and social world in which Blake operated, in some form other than mere plain text placards. I know such interventions are expensive, but in an ideal world, at least, some video demonstration of acid engraving and perhaps some staggered picture heights to render them more accessible to a variety of Blake fans would not be out of reach!

That said, the variety of methods of display and attention to making the exhibition navigable and ensuring as much foot-flow as possible can’t be criticised, and ultimately this is the equivalent of a Stones reunion tour: new material isn’t necessarily welcome to the majority of visitors.