I know it seems like all I do at the moment is promotion but at least I’m posting at all, right?

And I come bearing more good news in the form of an anthology!

A Fool For You is an LGBTQ romance anthology built around the theme of tricksters and deception (but with guaranteed happy endings), edited by Samantha M. Derr and published by Less Than Three Press. I’m fortunate enough to share space with some fascinating-sounding stories, under my romance-and-erotica pseud Melissa Snowdon (because really, who is going to trust a man to write romance). 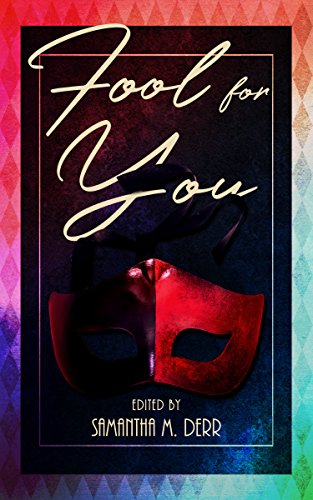 I’ll let the blurb speak for itself:

Wagered & Won by Helena Maeve—Nearly caught picking pockets at a casino in Silvergarde, Kathra owes her closest getaway yet to the mysterious Cecily, a bewitching gambler with a lethal secret. Over the course of a single night and a high-stakes card game, Kathra is drawn into a web from which she may not wish to escape.

Toils & Tricks by Asta Idonea—Centuries ago, the gods grew tired of being forever on call, and so they hired counterparts to be their representatives. When Sverrir, Loki’s representative, is called on to foil a blackmail scheme, he think it will be a simple task…

Whiskey & Pixie Dust by L.J. Hamlin—Shane loves and hates his best friend, a mischief demon, in equal measure. But when the demon takes it upon himself to play matchmaker, Shane thinks the hate might just win out.

Sussicran: A Love Story by Melissa Snowdon—Eager to escape an otherworldly bet, mirror demon Llednew determines to steal the life of a lonely young man. But executing his brilliant idea proves to be more difficult than anticpated.

A Spell for Luck by Daria Defore—When he’s forced to spend the summer studying magic at his aunt’s house, a bored Tom promptly starts looking for any way to escape. He probably shouldn’t resort to making a deal with an extremely friendly demon, but he’s too curious to say no…

Kneadful Things by Laurin Kelly—When Adam answers an ad for work at a local bakery, he has no idea what he’s in for. Despite the storefront’s dilapidated condition and isolated location, a steady stream of customers come through hoping to find what they’re looking for from Jin, the mysterious owner.

How to Trick a Trickster by Ava Kelly—Eric is a trickster working for the Corps of Undercover Passion Instigators and Distributors. His latest assignment takes him to a bookstore where he has to bring together Ivo Newton and Tom Euler. What he’s not supposed to do is fall in love with both his targets.

The Great Coke Robbery by Kashmira Majumdar—Charlie and Jack used to be the best in the business in the heist business. And then Charlie fell in love and settled down. Ten years later, Jack is debt-ridden and down on his luck, and in walks Charlie, proposing to pull off the most outrageous job of their lives.

As I’m drowning in research reading and outline editing at the moment I haven’t had the chance to read the works of my co-contributors but I’m pretty sure from these blurbs that they’re an absolute treat.

The book’s available on Kindle, and I believe there are plans for it to come out as a paperback as well.

The author has been enjoying the sudden sunshine in London and hopes you have too.