Exclusively on Amazon Kindle, on every Amazon Kindle site (I will link to UK | US but trust me: every site), a short story rather unlike any of my others in content and in style, The Renaka Device is fairly strongly-influenced by Ray Bradbury, I think. 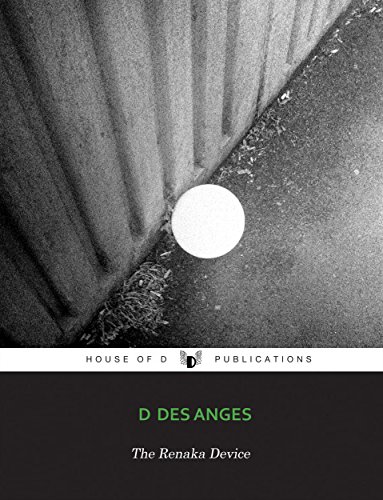 My name is Potsve Revolution Renaka.

I was born a month after the fall of the old order. In celebration, my parents named me Potsve Revolution.

I can’t say much more without spoiling the story for you; feel free to pick up your copy (UK | US); Text-to-speech is available on this book for anyone who has difficulty reading from screens or is simply too busy to read but can listen.

Currently I’m plugging away at another sci-fi short story, The Grandmother Virus (which is giving me a headache, I won’t lie); other short fiction of mine you can treat yourself to in the meantime includes: Hannah Matchmaker’s New Skates (a rollerderby fable), Vessel 151-B (classic sci-fic take on the Pygmalion story), and Saint Grimbald’s Men (bodyhorror bildungsroman. Possibly).

Stay tuned this November for regular updates on how awful it is trying to pull an entire manuscript out of your face in one sitting.

what’s your advice on creating interesting, likable and realistic characters? And creating strong, emotional bonds between two or more characters?

And one long, windy, incoherent reply:

Realistic characters are super easy, you just have to know, y’know, people. Stalk people! — there is possibly a less creepy way of putting that but I still have the Weird Plague so I’m not searching for it right now. Listen to people. If you’re already the therapist/confidante for your group of friends this helps, because you will get to hear how people talk about themselves. Read people’s personal blogs. Read published diaries. Read email transcripts. Read published collections of letters, the more mundane the better. Eavesdrop on people in cafes, bars, on public transport. Sit silent in chat rooms. Wander onto forums as a guest. And talk to people, if you can stomach it and if you feel safe. Listen to how people talk about each other in their absence, too.

This fills you up with other people’s language and other people’s fears, desires, griefs, triumphs, and their facades (always worth remembering that everything people communicate consciously is something they choose, to a degree, to demonstrate, and sometimes/often it’s intended to give a specific effect).

Personally I also read a lot of (popular, since I’m not especially smart) books from the holy trinity of People Understanding Sciences: sociology, neurology, psychology. “Why the fuck do people do that” / “how do people work” (child development books are good for this too, imo). I like this because it’s easier to tweak things about a character if you have an idea of what life event is likely to result in what kind of variety of flaws or fears or so on & hopefully reduces the likelihood of getting repetitive. Also: blogs on How To Understand Neurotypicals written for people who are Neurodivervgent/ASD/etc are remarkably useful for Neurotypical writers because they will explain the why of things.

A strong, original character is one who lives as a person, basically. Either they are the centre of their own universe or the transference of a universal centre to an item, individual, or quest makes them fanatical, weird, comment-worthy by other characters. Secondary characters should always always always always have lives, concerns, and priorities outside of the protagonist. Antagonists need, again IMO, to have inner life. Assuming your antagonist is a character and not, say, “the concept of death”.

Uh… oh, right, bonds. Interactions create those. You can short-cut people to understanding that two people are very close by the way they interact; you can show the growth of a bond by the changes of interaction between characters (lazy: by using less and less formal language; by reducing the physical space between them; by increasing the humour and such in their conversations). A fun game to play in public is detective over what kind of relationship two strangers have to each other (I mean, strangers to you). Analyse what makes you reach your conclusions; transfer this to depictions in writing. Remember that cultural and subcultural mores play a role in this – teenage boys express affection by shoving and hitting each other, etc.

Try to avoid the temptation to demonstrate closeness by overshare of personal backstory – if your character is the kind who overshares personal backstory almost immediately it won’t be a show of affection but of disorder, if they turn it into a joke — ref. Deadpool and Vanessa flirting — it tells you about the character (less the backstory and more how they talk about it, how they use it as currency/recognition), but the intimacy isn’t formed then.

Short-cuts to bonds which are very popular in certain works (and uh, also in real life by people who are grooming someone) include “going through a traumatic event together”, which is often the basis of bringing together a disparate group of people – but it’s worth considering that the type of bond may not be intimate, long-lasting, positive, or even an attractor – some people who go through trauma with other people want nothing more than to be away from anyone or anything that reminds them of it.

Likeable is difficult, because obviously what appeals to one person will not appeal to another; I love Patty Tolan the best out of the recent Ghostbusters movie but many other people prefer Holtzmann or Abby etc… attempts to appeal to everyone all at once lead to Stubbly McQuiptits, Joss Whedon Syndrome, or everything Stephen King has ever done. I think in that respect the only real gauge you can rely on is yourself/test readers. Read their dialogue and interactions back to yourself or have it read back to you (to divorce it from your own voice), and try to think about whether this is someone you want to read about – not the same thing, obviously, as someone you want to hang out with! (I adore Miss Temple in Glass Books but I’m pretty sure I’d want to hit her with a tea tray if we had to socialise).

With likeability too I think realism is important; someone with a gamut of emotions and experiences and who has enough stacked against them that people can sympathise (as the majority of readers aren’t going to be bajillionaire superhots who effortlessly got their PhDs aged 7; part of the appeal for most of, say, Matt Fraction’s Clint Barton is that while he may have incredible skills in one area and be overall a good and heroic dude, he’s a dysfunctional shitmess in pretty much every other area).

I am, in theory, working towards a slightly less bombastic version of How Not To Write at the moment.